Painting for 2012 has got under way with quite a push. 53 horse including generals and three units plus the first half of my 1914 French for the new Square Bashing. First picture though is of my new table. Previousley I have made do with two paste tables with MDF board laid on top. Easy to take up and put down but a bit wobbly. Now I have 'The Office, my mate Keith came over a couple of months ago and built me a permanent table which has the opposite issues of the paste tables. And since its being up its become a large workstation come dumping ground. So I thought better have a look at what it looks like with an actual game set up on it. This is a game of AK47 Reloaded as a bit of a change from Square Bashing. The nice trees are some made by Simon at the club. Possibly slightly tall for Acacias, but more Africa looking than my aquarium plants I have used in the past.﻿ 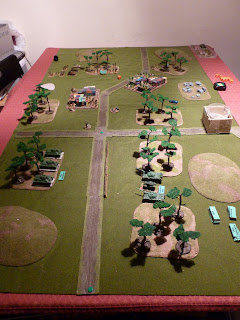 The problem with clearing the table is the effect on my painting station! A tad cluttered now. But, as they say, this is where the magic happens! 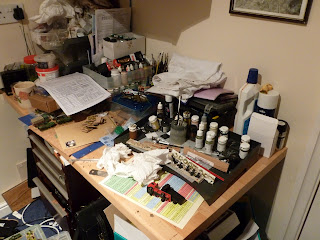 Here is an example of one of the General bases for my Wars of the Roses. This is acutally the King pack from Peter Pigs 'Bloody Barons' range. 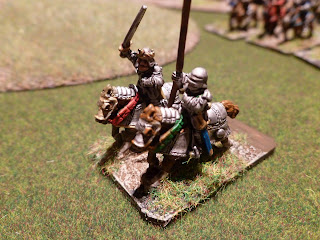 1914 French officers base for my latest project. 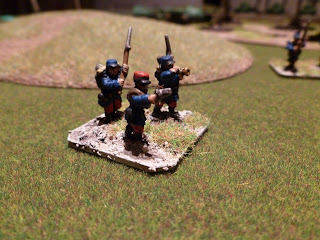 The whole unit. 4 bases of 3 figures. Around 10-12 infantry units, 6 mgs and 5-6 guns plus maybe a cavalry unit make a decent army for the new version of Square Bashing. I am just back from Yeovil where we had a weekend of playtesting. Pictures will follow. Suffice to say that I am really enjoying the rules and have 5 armies in various stages of completion. The early war French add a dash of colour to otherwise drab uniforms. I am going to mix painting up by giving some units the lighter blue kepi cover and some others in blue trousers. 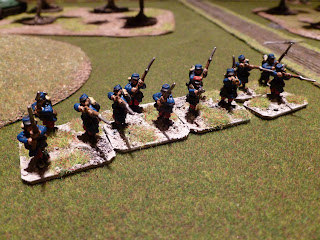 This is the cavalry plus some French from the last post. Now all based up and varnished ready for action. 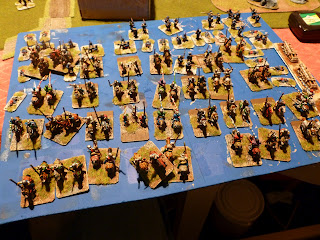 A closer look at a unit of Retinue cavalry. I am totally sold on basetex from Colour Party for my bases. Previousley I used flock for quick and easy basing but now prefer the look at the cost of slightly more work. I think its worth the effort. 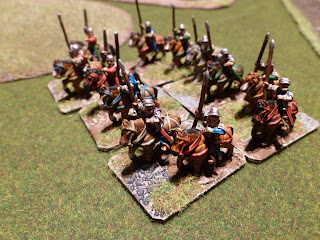 More 1914 French on the blocks followed by 1918 Germans. Looking foward to Alumwell on March 11th but not sure of any purchases as yet. 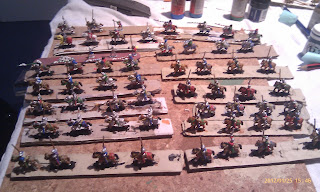 These are my Wars of the Roses cavalry painted over the last week or so. They are all Peter Pig figures from their Bloody Barons range. 2 units of retinue horse, 1 unit of men at arms and around 6 or 7 mounted generals with companions. They are pre dip so look a tad bland here. They are now dipped and look rather nice.

The men at arms are actually made up of the mounted bodyguard figures and have alot more colour to them than other men at arms I have painted and probably more colour than is historically accurate. But they are my figures and the splash of colour looks nice! I'll try to add some close ups when they are based and varnished.

I have enough cavalry for all the scenarios in the Bloody Barons rule book now. I am just short of a few crew for the heavy guns and I will have all the figures I will ever need. My plan then will be to refight each of the battles in chronological order, starting with 1st St Albans.

Labels: Wars of the Roses

I've been painting ALOT of Wars of the Roses cavalry the last couple of weeks. Over 50. All at once. Which I dont really recommend but they were all ready and primed and have been waiting patiently for some love with all the WW1 action going on in the Office lately.

So, finished them a couple of days ago. The painting that is. Because when I came to base them up I couldn't for the life of me remember where I had put the 3cmx4cm bases made by Peter Pig I needed. Now any sort of modeller/wargamer worth his onions would improvise and use card or similar to make do. But my entire collection is based  on the plasticard bases Peter Pig produce so I am afraid the patient horse men will have to await me collecting my order from the York show on Sunday.

And I am fairly sure, just as the last drybrush is applied to the new bases up will pop a whole stack of the missing bases I know I have SOMEWHERE.

Whilst under the weather with man flu I have enjoyed trawling the web and various hobby blogs. A most enjoyable blog with inspirational pictures is that of Phil Steele. Links are over to the right. His work on Peter Pig figures is excellent and has spurred me on to try my first 'head swap' conversions with some tam'o'shanter heads to replace the glengarrys on one of my two First World War Scots units from Peter Pig.

A preorder is in for collection from York consisting of mainly bits to finish my 1918 Germans. Who knows what impulse buys I will come away with. Hopefully not much as I have more than enough going on. But if i see a reasonably priced ancients army I might be tempted.

Anyway I'm off for a lemsip. 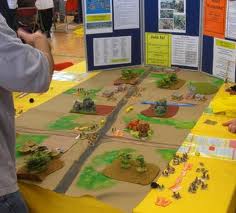 Reading Material (or what I am reading)

Sean Clark
Hello. This blog is pure self indulgence as a method to motivate me to get stuff done and discuss my thoughts on the hobby. You will find in the main rules and figures made by Peter Pig, with the occasional diversion elsewhere. I hope you find something of interest.